Gleeds receives prestigious award from the Ministry of Defence

Having been recognised for the support given to those who serve, or have previously served, in the UK’s armed forces, Gleeds has received the prestigious Silver Employer Recognition Scheme Award.

The award ceremony, which took place at Burleigh Court Hotel in Loughborough on 9th November, was attended by 21 public and private sector businesses from around the region who were presented with a certificate by Colonel Tom Redgate, The Deputy Commander (Reserves) of the regional Army Head Quarters.

In order to achieve the Silver Award, employers have to have signed the Armed Forces Covenant. They also have to show flexibility towards annual training commitments, mobilisation of reservist employees as well as having maintained the employment of cadet instructors, Armed Forces veterans (including wounded, injured and sick) and military spouses/partners.

John Wilson, the Ministry of Defence’s Regional Employer Engagement Director, said: “Employing members of the Armed Forces community is beneficial to employers as they can often use the specialist skills and training individuals have gained through the Armed Forces in their workplace. Skills such as teamwork, problem-solving and having the experience of leading a team can be transferred into any civilian organisation.”

Commenting on the award, Gleeds Executive Director and Head of Training & Development, Stuart Senior said: “We are deeply honoured to have received the Ministry of Defence’s Silver Employer Recognition Scheme Award. The commendable attitude and dedication of all those working for, or connected with, the Armed Forces contributes hugely to the work taking place at Gleeds.” 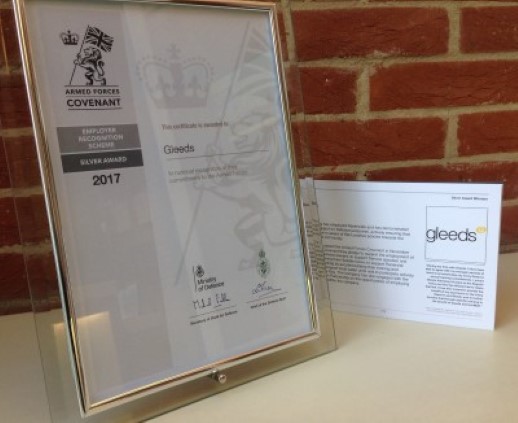